English is (not) fun!

Mamie mai bpen kruu (Mamie is not a teacher). I’ve said this so many times it’s almost become part of my standard PCV introduction.  Everyone wants me to teach English and everyone thinks I’m here to do just that.  It doesn’t help that every other farang in the area is here to teach English, including another male PCV that lives close to me (I’m convinced most people are somewhat disappointed that they got me instead of him; not only is he a white male, he’s actually a teacher and here to help teach English).  Once a week I teach English at the SAO (subdistrict administration organization – the government building that’s kind of responsible for me here).  It’s an hour lesson every Wednesday and the class includes a various mix of teachers, SAO officers and a few other people.  They often seem as excited to be in the class as I am to be teaching it (which is to say there is no excitement).  I do my best to psych myself up every week and prepare a fun, engaging, informative class, but sometimes it’s hard to teach English to a class of 30 people all by myself in a way that’s fun and engaging and informative all at once (also did I mention I’m not a teacher?).

Kids learn English when they start school here.  Every time I go to a school I get the standard greeting, ‘Good morning teacher! How are you today? I am fine’.  I’m fairly certain they don’t know what any of this means, as they often run through the whole thing without pausing for a response: “good morning teacher!  How are you today? I am fine thank you and you?” or some variation of that.  It’s cute, but a little disheartening that they learn this so young, repeating it every day and yet many of them don’t know what they’re saying or when to say it (even adults sometimes will say ‘good morning’ to me at 6pm, or as I’m riding my bike I’ll hear a group of kids screaming ‘goodbye!’ at me as I approach them).  In these visits to the local schools I’ve made sure to explain my role as a Youth in Development volunteer while also repeating that I’m not a teacher.  I had a lovely conversation with a teacher at one school about this, and just after I thought she had an understanding of what I’m trying to do here, she goes in front of all of the students who had assembled together at the end of the day and tells them about me.  ‘We have a teacher here from and she’s going to teach you English!’ Facepalm.

After PST I knew that teaching English would likely be part of everything I do, and I’m more than happy to incorporate it into the activities I’m involved in.  I quickly realized that it’ll be a struggle to get any projects started that are more than just teaching English – at least for a while.  I’ve gone past the point of frustration sometimes when I have the ‘Mamie is not a teacher’ conversation.  I tell them this and they laugh at me and call me a teacher.  I tell them about what I’ve done in America and what I can do here and they look at me like I’m an idiot (and then ask when I’m available to teach English).  They put me in front of a class of students, leave the room and insist that I’m not teaching, I’m just talking with the students – in English.

I appreciate their desire to learn English.  I realize that ASEAN (Association of South Eastern Asian Nations) is important.  I understand that everyone is preparing for the launch of the AEC (ASEAN Economic Community) in 2015 and learning English will be helpful for so many reasons.  But that’s not what I’m here for, and my community was (supposed to be) well aware of my role before I showed up.  If I wanted to teach English I wouldn’t have joined the Peace Corps.  I would have taken a job that paid me to teach English instead of choosing to volunteer for 27 months.  I’ve readjusted my expectations about my service several times over the past 5 months.  There’s a difference between the wild, infinite ambitions I dreamt of prior to coming here and the reality of my service now that I’m here.  This isn’t to say that I’m not still ambitious – it’s just that now I have more realistic ambitions based on the realities of my situation, community, and resources.  My thus-far short career in social work has taught me the importance of meeting people where they are.  Look at the situation as it exists, not as you think it should be.  You can’t charge in with your ideas of what you think is important without talking to the people involved and finding out what’s important to them first – you’ll never accomplish anything if you do.  I’ve done this before and learned a lot from it every time.  I did this during my field placements in grad school on an individual and community level and throughout the 3 years after grad school that I spent working in initially unfamiliar neighborhoods on the southside of .  The process of doing this in a new community, in a foreign country and a foreign language will take many months to accomplish, I have no doubt.  In the past couple months I’ve been saying yes to every opportunity and having conversations with everyone that I can.  I’m teaching English because so many people want to learn and I have the time to do so right now.  I also incorporate my own agenda, teaching about American culture or giving them words other than ‘fine’ to explain how they’re feeling today.  I’m also building relationships with these people that I hope will turn into other possibilities down the road.  There’s a reason I’m here for 2 years.  I can’t expect to start an amazing, life-changing project a few months in (although I can’t help but secretly hope that my small Tuesday youth group will turn into a spectacularly successful 2 year project).  So for now, I teach a little English sometimes and remind everyone ‘Mamie mai bpen kruu’.
Posted by mamie at 10:02 AM No comments:

I’ve had a hard time adjusting to the fact that dogs are treated much differently here than they are in .  My natural reaction with dogs is to pet them and play with them.  The natural reaction here is to shoo them away, ignore them, or hit/kick them.  It’s sad and I don’t think I’ll ever really get used to it.  I’ve had to check my instincts several times as I’ve come close to having my hand bitten off when trying to pet some of the dogs here (this is on the rare occasion they don’t instantly run away from me instead).  A lot of people have dogs as pets, but I’ve found they’re often treated no differently than the soi dogs, or street dogs that you see wandering around everywhere – besides maybe the fact that they’re given food on a regular basis.  It hasn’t ceased to amaze me how unfriendly these dogs can be, and I don’t blame them given the way I’ve seen them treated.  I have run into a few friendly dogs and have really enjoyed the dogs that have lived at both of my host family’s homes.  The dog at my first homestay was afraid of me for several weeks and would always run away from me, but eventually I made friends with him and I’d like to think he was sad to see me leave (I was the only one that really paid attention to him and snuck him treats and showed him affection).  The dogs at my new homestay are friendly and always entertaining and warmed up to me in no time, which I love. 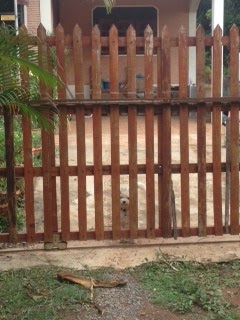 One of the dogs at my host family's house

One of the things we were taught in PST is how to avoid dog bites.  I’ve realized over and over again why we covered this in our first week of training, because every time I ride my bike I’m chased by at least one dog (usually it’s 3 or 4 at a time though).  The water bottle attached to my bike has become the designated dog water bottle as I use it to squirt the dogs that don’t give up on chasing me and come dangerously close to taking a bite out of my leg (it also turned moldy on the inside from being neglected and left in the sun, and I refuse to try to clean it since I always have another bottle of water with me).

To my delight I recently found what looked like a golden retriever puppy, and given how much I love golden retriever puppies I couldn’t help but want to steal him and make him mine.  I’m used to these puppies being overly friendly and licking my face to death.  When I tried to play with this puppy he ignored me and walked away.  When I tried to feed him pieces of my ‘chicken’, he grabbed it so harshly from me that he bit into my finger.  I was crushed that this cute little thing could do something like this to me, however I think it was less out of intent to harm and more due to overexcitement about whatever was in my hand.  The next day I reluctantly informed the PC medical staff, and as I suspected they told me to go to the hospital for a rabies shot (we were given 3 initial rabies immunizations during training).  Although it had been more painful than I would have imagined, the bite was small and I wasn’t really concerned about it at all, but there was still a small, miniscule chance that I could die from rabies, so I knew I should probably get the shots.  Everything was halted for the day as my supervisor, his driver, my counterpart and I all piled into my supervisor’s vehicle for the hour and a half trip to the nearest Peace Corps friendly hospital.  Why we needed 4 people for this I’m not sure, but we went, I got the first of 2 required shots, and then we went for steak and coffee before heading home.  I opted not to eat ‘steak’ as I knew it would only be a disappointment (as I’ve found out the hard way about many things I get excited about here….like ‘cheese’ or treats that look like cakes but also have a surprise filling of tuna, corn or beans).  I had to go back 3 days later for the second rabies shot.  Needless to say I’m even more careful around dogs I don’t know now.  As much fun as the rabies roadtrips were (I got a box of doughnuts out of the second rabies roadtrip – a gift from my supervisor’s wife, along with two meals – neither one of them ‘steak’ – and an assortment of fruit and other treats), I’d rather not do it all over again. 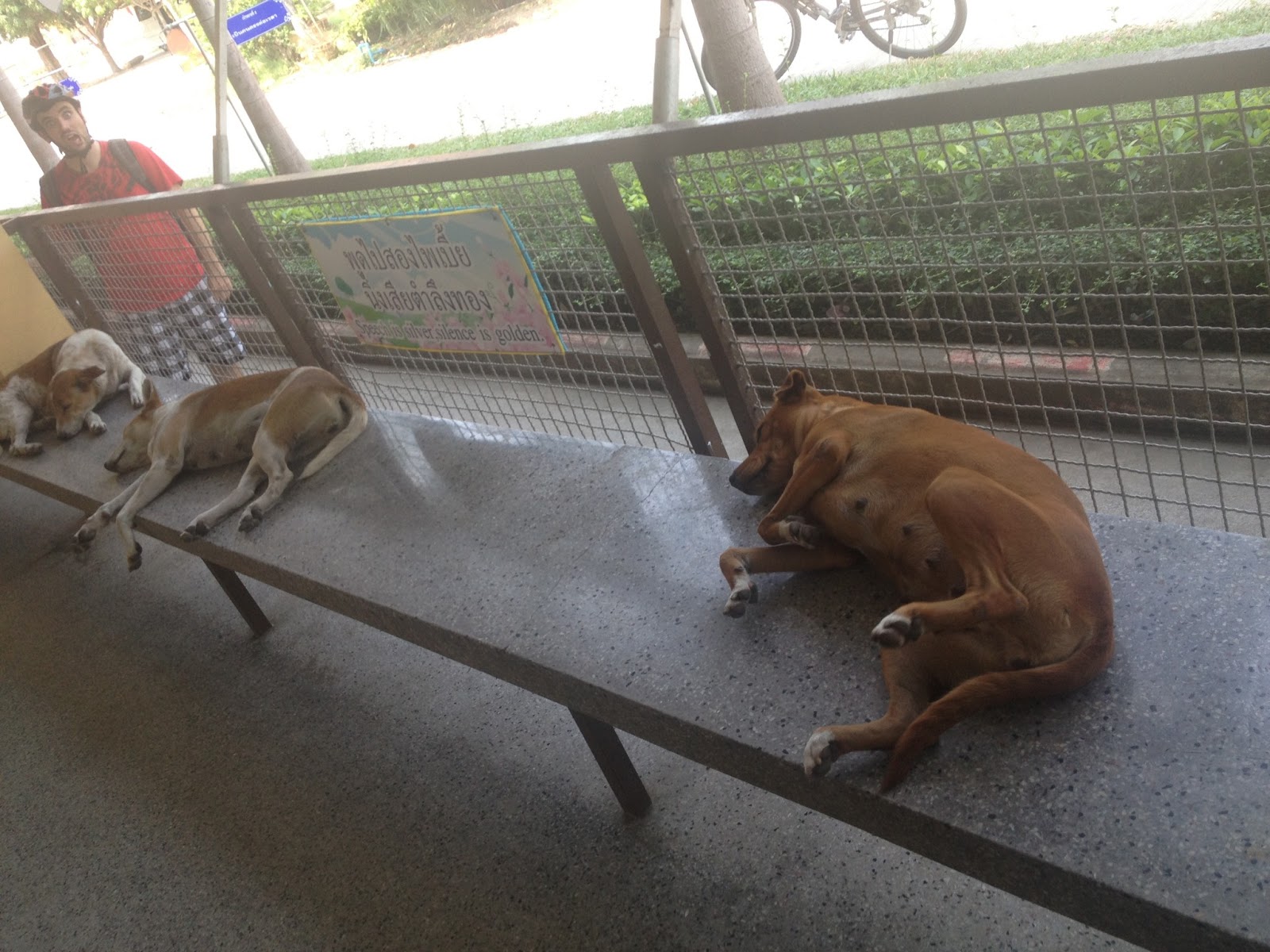 Dogs on a school bench during PST